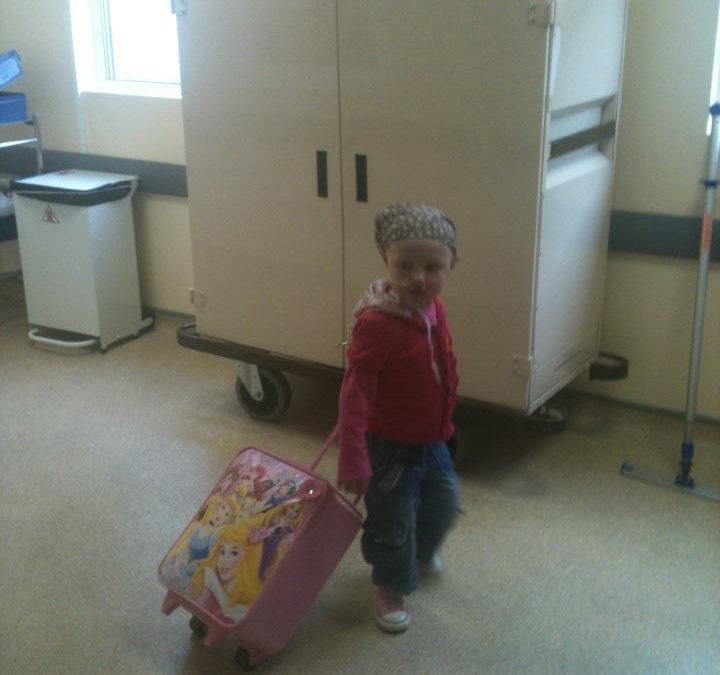 Back to the beginning of 2012 and we sank back into the scary routine of chemotherapy, weight loss, hair loss, energy loss…  Everything is a loss with chemotherapy bar the important fact that it pushed Kerri into remission which is where we needed to be prior to preparing for transplant. We got news that a donor had been found in Germany, a complete stranger that was going to do something wonderful to save our girl. I often think of the donor, and did they actually realize the enormity of the selfless act they were undertaking.

The date was set for the transplant – 1st May. We knew we would be in isolation for at least 40 days and you start the journey 9 days prior to D-Day. Visiting is a big No No in transplant as the risk of infection is so high, but we were allowed one nominated person to give myself and Paul a break to eat/sleep but apart from these factors we really had no idea of what was ahead, only from what we had heard from other parents.

We headed into the Transplant Unit on 22 April and Kerri started all the pre-medication including chemo to push her own immune system down so low that the chances of her rejecting the new bone marrow is  greatly reduced. Kerri, aged 4 now, took everything given to her, oblivious to what will come after.. the effects of all these drugs. We, on the otherhand, had been given a run down on what to expect over these 9 days and beyond, and we started each day with the dread of the next side effect that would rise its head that day. We both sat powerless while our girl suffered these effects each day.

The day of the bone marrow transplant is quite surreal. There’s no big operation like other transplants, the bone marrow is given as a drip through Freddy and looks similar to a platelet/blood transfusion. The difference being lots of people are in the room when its actually being given- the consultant, another doctor and two nurses. This is to closely observe Kerri for any bad reactions to the drip… so you think its this big day but actually its quite an anti-climax, its the days following that are much more important. The count then starts as day +1, +2 and so on. Each day they are monitoring Kerri’s bloods to see her counts, so they are anxious for Kerri’s bone marrow to start building back up her own immune system but now in the form of the Donor’s DNA (very scientific!)

Paul and I were lucky enough to stay in Ronald McDonald house while Kerri was in the transplant unit. This meant we were both on site at all times even at night, which was such a blessing as some nights, whoever was with Kerri might be up all night due to one reason or another. We could also cook dinners there when my mam relieved us each day for 2 hours.

All our immediate family and friends found it particularly difficult while we were in transplant as they couldn’t visit Kerri. They could only go on the updates we gave them.  But 32 days after the transplant and a total of 41 days in isolation, we were allowed a few hours out to see family. Such an emotional afternoon.

On the 5 june, we were discharged home..